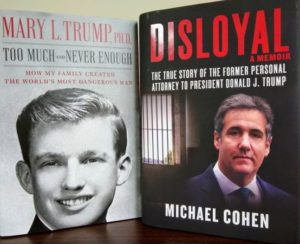 We’ve all spent way too much time at home this year.  And since we’ve been stuck at home, we have all seen a lot of TV and way too many commercials.  My vote for the worst commercials are the ones that feature people who owe tens of thousands of dollars in taxes.  They always claim that they owe the IRS money and the IRS is going to garnish their wages and take all of their nice stuff.  But “The Fresh Start Initiative” or some other program and the sponsor of the ad will make the IRS go away.   These tax cheats don’t owe the IRS money.  They owe the US Treasury money.  And the US Treasury is us, you and me.  Those tens of thousands of dollars are replaced by you and me.  I really wonder if other countries tolerate and reward tax cheats the way we do in the United States.

Too Much And Never Enough by Mary Trump and Disloyal by Michael Cohen are dystopic bookends, the making and facilitation of the private and public persona of Donald J. Trump.  Ms. Trump’s book deals principally with the family dynamics, the imposing cruel figure of her grandfather, Fred Trump, and the ultimate destruction of her late father Fred Trump, Jr., aka Freddy.  She details how Fred bullied and domineered his children, their spouses, ex-spouses, and grandchildren.  The pattern was set.  The cruelty was an end in itself.  Mr. Cohen picks up the story in 2006 and takes us behind the scenes of the Trump Organization and Trump’s personal dalliances.

Since Mary Trump is a Trump, the real start to her book isn’t about her need to expose her uncle as a charlatan or world-class grifter.  The core of her book is how her grandfather, in a final act of belligerence, cut her and her brother, the late Freddy’s children, from his will.  With the help of several reporters from the New York Times she learns that her uncle Donald, now President Trump, her Aunt Mary, the now disgraced former federal judge Maryanne Trump Barry, her uncle Robert Trump, and her aunt Elizabeth Trump Grau, her generation’s Tiffany Trump, conspired to cheat the federal government out of millions of dollars in inherence taxes.  They got away with a $30 million valuation of Fred Trump’s billion dollar estate.  As a bonus they were also able to cheat Mary and her brother, Fred Trump III, out of millions of dollars.  Lawsuits helped her and her brother get some of the money they had been due, but it wasn’t until the investigative reporters got involved did she fully grasp the extent of the deception.

Michael Cohen is an angry, angry man.  He spares no one in his detailed explanation of his downfall.  And he is clear that he, himself, is the one who deserves the most blame.  His goal was to be rich, famous, and powerful.  It was a drug and Donald Trump was his pusher.  Addicted, he willing lied, cheated, and stole to stay in the good graces of the man he called The Boss.  In the process he describes the lives he destroyed, the people and businesses he stiffed out of hundreds of thousands of dollars, and the rules (legal and norms) he broke at the behest of Donald Trump as the day to day duties of his job.

Much of the publicity surrounding Disloyal has been about the way Cohen and David Pecker of the National Enquirer protected and promoted Donald Trump and his interests.  The salacious details involving the “Catch and Kill” of the Karen McDougal story and the payoff of Stormy Daniels have received a lot of attention.  I recall writing about the boilerplate nature of the non-disclosure statement Stormy Daniels signed after it became public.  But it is the detailed stories of how Trump and Company screwed businesses, some as large as the Benjamin Moore Paint Company, that got my attention.  What Cohen describes in the book is the same bullying, foot-stomping, and aggrieved whining that we see playing out post-election.  The current behavior is totally predictable.

Mary Trump’s and Michael Cohen’s books are depressing because Donald Trump, by himself, is a failure.  For 70+ years he has benefitted from a combination of his father’s money and good graces, and a surprising collection of enablers, sycophants, and weasels.  He is adept at taking and alert to weakness, whether it was the others on the stage with him during the Republican Debates or the guys like Portman, Cruz, and Rubio in the Senate.  It is depressing that Donald Trump got this far.  And it is depressing that our country revealed itself to be so vulnerable.

There will be pardons issued in the next weeks.  It has been predicted that Trump will pardon himself.  The US Treasury will have been cheated one more time.  For those looking for good news, there isn’t a “Fresh Start Initiative” for State of New York taxes.