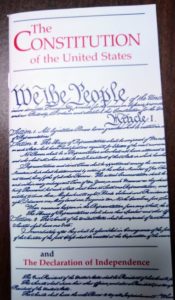 Good afternoon, Geraldo.  Our democracy is under attack.  The states of New York and California have filed their case with the Supreme Court.   The suit seeks to overturn the recent Congressional elections in a number of states including Ohio, Florida, Alabama, Mississippi, Louisiana, and several others.  They allege that Gerrymandering and voter suppression have created an illegal process that resulted in an election that must be reversed.  I’m personally shocked at the idea of states suing states to change the results of an election.  Let’s join the New York / California press conference already in progress.

There is no argument that the named states have systematically disenfranchised

millions of voters.  This has cause the rest of our country great harm, which we are

prepared to argue before the Supreme Court.  Think about it, would a Ted Yoko of

We will return to their press conference in a moment, but first we’re going to go to our reporter, En Ablur, who has caught up with Robert Lee, Alabama’s Attorney General.

Attorney General Lee, are you prepared to answer this suit?

En, this is terrible!  Fighting this law suit will be a burden on the taxpayers of Alabama.

We don’t have the money in our budget.  Sure, we were part of the Texas lawsuit in

2020, but that didn’t cost us a dime.  New York and California are serious and they

have some of the world’s best Jewish attorneys.  In 2020 all we had was Paxton from

Texas.  And who are New York or California to come and interfere with Alabama?  Our

people like our system.  You never hear them complain about standing in line to vote.

Back to you Mike.

Thank you, En Ablur for that report.  This, ladies and gentlemen, is an affront to our democracy and everything we hold dear.  As I said to Mother last night, “These radicals with their leftist gay agenda will ruin our country by changing the natural order.  We must fight to make America great again”.   It is my hope that we keep our voting system the way it has been, the way it has always been, so that we can continue to elect the right people.  We’ll return to Geraldo after this message from My Pillow.

Be careful who you sue.  The counter-suit could be devastating.

1 thought on “Be Careful Who You Sue”