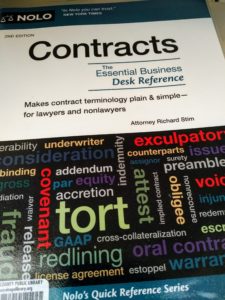 This is a quick question for all of the attorneys out there. When your client asks you to draft a Non-Disclosure Agreement (NDA) to silence his mistress about their illicit affair, do you click on LegalZoom, or formsRus to get the document?  Do you reach into his file, grab one of the previously filed forms and modify it as necessary?  Or, do you draft a new NDA for this particular instance?  In other words, is your Non-Disclosure Agreement boilerplate?

I only ask because there are some interesting clauses in the NDA between Peggy Peterson (AKA Stephanie Clifford, AKA Stormy Daniels) and David Dennison (AKA John Miller, AKA John Baron, AKA Donald Trump).  There has been a lot of speculation that Ms. Clifford might have pictures with her when she appears next week on 60 Minutes.  There is little doubt that she has tangible proof of the affair.  The NDA includes “certain still images and/or text messages which were authored by or relate to DD”.  In other words, our guy at 1600 may have been texting his mistress during the affair.  We all know how much he likes to Tweet.  Did he privately (?) send her sweet nothings in 140 characters?  But there is more.

But if you look at this from a few steps back, you have more to wonder if among Attorney Cohen’s sins of possible campaign finance law, sloppiness, and threats, if he has now been caught charging a ridiculous fee per hour to generate legal boilerplate.

2 thoughts on “Is Your Non-Disclosure Agreement Boilerplate?”