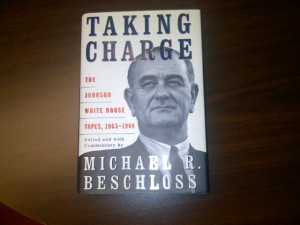 Civility, especially faked civility, is an art form. Those of us who follow politics fondly recall members of the Senate referring to their opponents and “My good friend…”  Their language was flowery, but the meaning of their words was never in doubt.  Lyndon Johnson may have been the most skilled at this.   Taking Charge, edited by Michael R. Beschloss, is a collection of taped Johnson conversations from the years 1963 and 1964.

But politics also has a long history of braggarts, blowhards and demagogues. One of my personal favorites was Governor Edwin Edwards of Louisiana who once noted that he couldn’t lose the election unless he was found in bed with a dead girl or a live boy.  And that brings us to Donald Trump.  Mr. Trump believes that he has an iron grip on his supporters.  In fact, he told a rally in Iowa yesterday “I could stand in the middle of Fifth Avenue and shoot somebody and I wouldn’t lose any voters, okay? It’s, like, incredible.”  Follow the link and you get to see him form a gun with his fingers making sure that this level of discourse is never elevated above what you would expect at a grade school playground.

I was talking with a successful local politician about the race. The big news for us is that Michael Bloomberg might enter the race if it comes down to Bernie and The Donald or Bernie vs. Rafael (Ted).  Even though both of us are Democrats, we agreed that we would welcome a pragmatist like Bloomberg.  G-d knows I don’t agree with many of his positions, but it is hard to argue that Bloomberg wouldn’t get more done than either Sanders, Trump or Cruz.  Some of my friends may disagree, but I have no idea why you would want to install an arsonist as the fire chief.

I was able to nudge and cajole 17 entries into this year’s contest, Everyone’s A Genius In Hindsight – 2016.  The deadline to enter has passed and I can now share with you some of the fun and surprising parts of this year’s challenge.

I always prepare my entry first. And once it is done, it is done.  Don’t ask how I came up with Youth as my guess for the Academy Award.  That and my choice of Seattle winning the Super Bowl were my first two misses.  Three of you chose Trump to win the Republican nomination, but only one picked him to go all the way.  I guessed Governor Christie with Bernie Sanders winning the presidency.  Remember, this isn’t about who you want to win, but who you guess will win.

Nowhere is that understanding of the game more obvious than in the category of Browns’ victories. I guessed 4 and most of guessed between 4 and 6.  Only two entries had guesses of 9 wins for the 2016 Browns.  The Indians fared a little better.  Almost everyone predicted 80 – 89 wins.

My biggest surprise was how few people knew that we have a Senator up for re-election in 2016, his name, and who is running against him. I predicted that Portman would win as did most of the other participants once I told them who was running.

I have always included a Supreme Court question in this contest. Initially it was (and to a point still is) a Broadcast News question.  This year I predicted 8 and I wasn’t alone.  If a current Justice stepped down, became incapacitated, or died, would this Senate confirm an Obama nominee?  Probably not.

Big thanks, again, to everyone who participated in this year’s contest, the only people allowed to say “I told you so” a year from now.