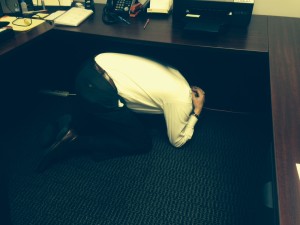 Frank Moore wanted my job. It was nothing personal.  Frank (name changed) was convinced that he should be a manager and since I was the youngest and most recent promotion, it fell upon me to get out of the way.  After all, Frank knew that he would make a terrific manager.  The year was 1981 and I was a 26 year old sales manager for Prudential.  Frank, a few years older than me, never tired of telling anyone who pretended to listen how he would lead a staff of agents.  The problem, as you’ve probably guessed, was that Frank Moore was failing as an agent.  He had zero credibility.

Being a great insurance agent doesn’t necessarily mean that you will be a great sales manager, but a mediocre agent seldom succeeds at any level. It takes time and effort to learn how and why systems work and to fully develop a foundation for future growth.  There are few viable short cuts in life.  And success in a totally unrelated field may not transfer to your new hobby or career du jour.

When is the tank full? When are you as great as you’ll ever be?  LeBron James doesn’t have any interest in exploring those questions.  Instead he is working, every day, to get better.  The announcers noticed his impeccable form as he executed jump shot after jump shot Saturday evening.  They noted that he had been having trouble and has been working on his balance and base.  Many of us have attended CAVS games.  Some of us have even played in organized ball for our schools or colleges.  I may even have a reader or two who have played professionally.  But are any of us ready to be the next LeBron?  I don’t think so.  Some of those passes and drop-steps looks so easy that we think that we could do that, too.  We can’t.

Those of us of a certain age were raised in fear. The Federal Civil Defense wanted us to learn how to Duck and Cover.  An atomic war was imminent.  It seemed as if the world had gone mad, but it was MAD that saved us.  Mutual Assured Destruction.  The Russians and the U.S. both understood that a successful nuclear attack would be savored for only a few minutes.  Blow us up and we will blow you up.  What made it really work was the understanding, on both sides, that just because it could be done didn’t mean that it should.

And that brings us back to Donald Trump and Hillary Clinton. Each has an amazing array of weapons to fire at the other.  After twenty-five years of Clinton drama, there is little that we don’t know and much that we have attempted to forget.  No one really wants to rehash all of that.  And Trump?  He has never been vetted for anything.  The marriages, the adultery, the policy flip-flops could fill the airwaves for months unending.  The difference is that this war, if fought, will not be deterred by the thought of MAD.  It will, in the end, be fought because of it.

I don’t believe that Donald Trump and Hillary Clinton respect the office of the Presidency and the people of this country enough to avoid an all-out war between the two of them.

And that makes me mad…

1 thought on “Frank Moore Wants To Be A Manager”