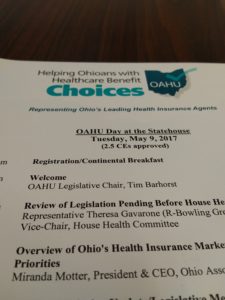 I spent most of the last two days in Columbus. As many of you know, I go to Washington DC and Columbus to meet with legislators and to get the latest news from the leaders of our industry.  We heard from several elected officials, Carrie Haughawout, Deputy Director of the Ohio Department of Insurance, and Miranda Motter, President and CEO of the Ohio Association of Health Plans.  As always, Ms. Haughawout’s presentation was worth the drive to Columbus.  She is a knowledgeable public servant who truly understands both the mechanics and the politics of providing health insurance coverage to Ohioans.

I had the opportunity to meet with both legislative aides and elected officials. A group of us were scheduled to meet with newly elected David Greenspan of Westlake.  Since he was stuck in a committee meeting, we met with his legislative aide, an engaging young man who took good notes and asked better questions.  Representative Greenspan got back to his office as we were about to wrap up, and instead of quickly shaking hands and moving on, sat down for a real conversation.  He was clear that his biggest concern was “not knowing what I don’t know”.    I doubt that Representative Greenspan and I agree on many issues, but I left his office confident that he would work hard to do a good job for his constituents.  Is there really anything more we can ask of our elected officials?

I had only been in the car for a few minutes, just on to I 71 but still in Columbus, when the news broke that Trump had fired Comey.  Who amongst us doesn’t have mixed emotions about James Comey?  Did he cost her the election?  Did he save her from a trial and possible worse?  He was a hero to some when he slowed certain excesses of the Bush White House.  He always struck me as an honorable man who overthought the gig and couldn’t understand why everyone was so upset.  So, I don’t mourn the loss of FBI Director James Comey.

Lynyrd Skynyrd released the song Sweet Home Alabama in June 1974, but I had heard it earlier when the band played Adelbert Gym on Case campus that March.

Now Watergate does not bother me

Does your conscience bother you?

Sitting on the floor, my freshman year, consumed by the news and the issue, YES, Watergate did bother me. And as per my conscience?  Well, I’m Jewish.  That whole thing about guilt is played mostly for laughs.  And here was a rock band, a really good rock band, pooh-poohing what would be Nixon’s downfall.

Lynyrd Skynyrd wasn’t alone in 1974. There were more than enough parents, teachers, and talking heads on TV suggesting that we get over it and return to other concerns.  But for many of us there was something gnawing at the very core of our beings telling us that there was more to Watergate.  We were convinced that this challenged our democracy.  It seemed as if the U.S. was in the balance.

Driving back from Columbus, switching on the radio from CNN to MSNBC to FOX, waiting to hear the reason (and probably the revised reasons) for this unprecedented move, I no longer thought about my last two days and any progress I may have made on behalf of my clients. What does any of this matter when we may be witnessing the transition to an entirely different type of government, one that no longer worries about the outcome of an investigation but simply eliminates everyone involved?  We watch as prosecutors and US attorneys get sacked, as Mitch McConnell runs interference, as the subject constantly changes while the money continues to pour in and wonder if the United States we knew a year ago will be remotely close to the one we’ll have a year from now.