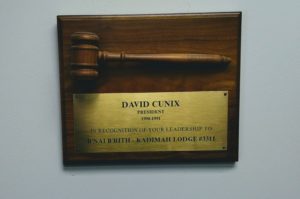 We were walking through the mall. A woman called out to Sally and Sally’s hubby.  Though not technically accurate, I saw no need to issue a correction.  I waved back to her and we continued moving.  Over the years I’ve been introduced at speaking engagements with a short recital of my credentials and awards, but like most of us, my normal title has been Dad or Spouse as in Jennifer’s dad, or Phillip’s dad, and quite possibly soon as Maple’s Zayde.  These are the best introductions.

When you are introduced as someone’s father, the emphasis isn’t on you, but the child. Years ago, when I was introduced as the president of my B’nai B’rith lodge, the emphasis was on the organization.  I happened to be the leader at that particular moment, but I never lost sight of the fact that this was an honor, a responsibility, and a commitment.  B’nai B’rith was far more important than either me or my title.

I was reminded of this while watching the TV news. The screen showed the latest tweet from the current US president.  Donald Trump was attacking public servants, attacking them because he has no respect for public service or the people who dedicate their lives to making America safer and better.   What has become clear is that Mr. Trump, neither the first president, nor G-d willing not the last, views himself as more important than the job.  Here is a man who was elected to be the head of the free world, but is disappointed that the gig doesn’t come with enough swag, yet.

We have seen this play out in other countries. Attacks on a free press? Check.  Scapegoating of minorities? Check.  Self-enrichment, a culture of kleptocracy?  Check.  Denigrating the rule of law?  Hell, we had a congressman today calling for a purge of the FBI!   A cult of personality?  Please, we’ve got a guy in Washington claiming he’s saved Christmas.

It is snowing outside and the temperature is in the teens. I want better weather if I’m going to live in a banana republic.

2 thoughts on “Just One Of Forty-five”