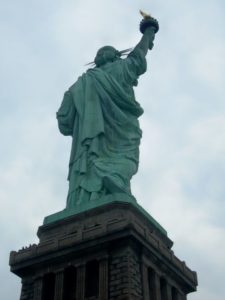 The 60’s were an era of cultural upheaval and activism.  It was a time of change in music, politics, and personal expression.  Some say that the 60’s began on November 22, 1963, the day President John F. Kennedy was assassinated.  I have always thought that the 60’s began on February 9, 1964, the night the Beatles first appeared on the Ed Sullivan Show.  What followed was a musical and fashion revolution, the assassinations of Martin Luther King, Jr, and Senator Robert Kennedy, the Vietnam War protests, the Summer of Love, and Woodstock.  And when did the 60’s end?  The History Channel says that the 60’s ended at Altamont, December 4, 1969.  Others site Kent State, May 4, 1970.  I believe that the 60’s ended on August 8, 1974 with the resignation of Richard Nixon, proof that our country needed both activism and the rule of law.  Both were important.

Some of us carry the 60’s with us to this very day.  We remember the marches and the speeches.  There were a lot of both and I confess that I delivered a few of them.  I still owe apologies to the youth groups and scout troops my friend John and I bored with our environmental presentations.  Some of us remember key moments, events that impacted us and motivated us to action.  For me, the 1968 Democratic National Convention in Chicago was my wake-up call.  I watched Dan Rather being assaulted by the security thugs on the floor of the convention.  Mayor Richard Daly said, “The police are not here to create disorder, they’re here to preserve disorder.”  It was time to choose sides and the choice, for me, was easy.

My volunteer work, my leadership in not-for-profit organizations, and even my choice of occupations are directly attributable to growing up in the 60’s when you were given the option of being part of the problem or part of the solution.

It was just after noon on Tuesday, May 26th that my friend Felicia posted a video on Facebook.  To my shock and horror I saw a policeman with his knee on a Black man’s neck.  He was nonchalantly snuffing the life out of a man.  His hands were in his pockets.  He didn’t have a care in the world.  I asked, “How is this acceptable? What will be the excuse this time?”

This time there were cellphones.  Lots of them.  We will never know If George Floyd, lying there on the street for the last 8 minutes 46 seconds of his life, could hear the pleas of the witnesses to his murder.  People were pleading for the police to let him breathe.  People were offering to help.  He did not die alone.  And those cellphones recording everything from multiple angles.

In the days that followed, the entire world has had a chance to see some of these videos.  There was no denying, this time, that a miscarriage of justice had occurred.  We have become witnesses to a murder.

George Floyd’s death will not be impacted by what happens next.  He will still be dead whether the four policemen are successful prosecuted and convicted or if there are no consequences for their actions like the men who killed Trayvon Martin, Philando Castile, and Tamir Rice.  George Floyd’s death isn’t impacted, but YOUR life can be.

Right now millions of young adults, high schoolers, and yes, even 12 and 13 year olds are watching this unfold on TV.  Many have had the opportunity to march in the streets and listen to speeches.  Some may have even addressed the crowds.  Will this moment result in a lifetime of action?  50 years from now will they cite this past week as their wake-up call?

The 2020’s can be a time of change, a time of growth, an era of personal expression.  We can make this a better country.  Our founding fathers said that all men are created equal, but they didn’t mean it.  Now is the time to commit to making it a reality.

Picture – Are We Stuck On The Wrong Side Of Liberty? – David L Cunix