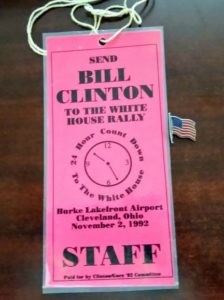 Sheila Buck wanted to attend the Trump rally in Tulsa.  She had a ticket.  The venue was less than half full.  There was plenty of room for Sheila Buck and 1000 of her closest friends.  Actually, according to the Fire Marshall, 10,000.  But Sheila was alone as she cleared the security checkpoint this past Saturday.  At some point, whether overcome by her need to attract attention or the spirit of her G-d, she unveiled her “I can’t breathe” shirt, fell to her knees, and began to pray.  Offended by the shirt and unsure which god she was evoking, the Trump campaign had the Tulsa police forcibly remove her from the venue.  It was a win for everyone involved.  Ms. Buck made the national news.  The Trump campaign got to have a protestor roughed up, but not too much.  And Trump wasn’t forced to hear a disparaging word.  Everyone won but the rest of the country.   We didn’t get anything positive out of any of this ongoing show and embarrassment.

I am reminded of a different rally, one that took place 28 years ago in Cleveland.  I was helping with security the day before the presidential election.   Bill Clinton was going to stop at airports across the country.  The crowd was huge and in good spirits. The future president was late.  The campaign theme song, Fleetwood Mac’s Don’t Stop, was on a loop for several hours.  We knew history was about to be made.

The Bush campaign had held a rally in Strongsville a few days earlier.  Strongsville High School students were taken to the rally on public school buses to the event.  Kids were stopped at the entrance and forced to remove Clinton campaign buttons.   It made the news and resulted in a lawsuit.  And, it was silly.   We were aware of that debacle as we waited for Mr. Clinton’s plane.  One group of young men got my attention.  They stayed together closer to the back of the crowd.  They had on heavier coats than most of us.  As the plane taxied to our area, I got a group of equally big guys to come with me.  The event started and our friends threw open their coats, revealed their Bush shirts and signs, and were surprised that the guys now standing right in front of them had bigger Clinton signs and made them invisible.  No fuss.  No fight. They put down their signs and walked away.

Did the Trump campaign need the Tulsa police and the Oklahoma National Guard to hold a rally?  Probably not.  There will always be dissenters at political events just like there are always hecklers at a comedy club.  The pros know how to handle the moment.

My post-election wrap up in 1992 included a paragraph about the Clinton rally:

Burke Lakefront Airport was the scene of Governor Clinton’s last campaign stop in Ohio. I took Phillip, Jennifer, and my new step-daughter Andrea to not only hear the candidates, but to also work as volunteers. I had a great time, but my experience paled beside Phil’s. He not only shook the eventual winner’s hand, he also shook hands with the future First Lady and exchanged pleasantries. Energized, Phillip volunteered to work the balance of the campaign. He learned more about the election process in two days than in all his previous schooling

By the way, Andrea was disappointed that Phil and I had the opportunity to shake hands with the future President and she hadn’t. I told her that it wasn’t that big a deal. After all, more people shook hands with Bill Clinton than had seen Madonna naked.

Political rallies should be a big deal.  They should be POSITIVE, motivating, and family friendly.   I’m looking forward to returning to those simpler times.