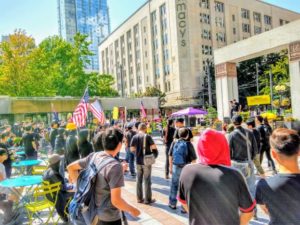 We had a couple of Fortune Cookies left over from the other evening.  Our tradition is to crack open the cookie, take a brief look at the fortune, and then to make up something on the spot.  I opened mine and stopped.  The message was, “There are no ordinary moments”.  That was better than anything I would have imagined.

I have lived in Greater Cleveland most of my adult life.  I negotiated a transfer here in 1982.  This is home.  I live in a suburb, one that doesn’t appear on most maps and that wouldn’t thrive if it wasn’t part of the greater whole of Cuyahoga County.  The moment I am more than 30 miles away from home, when asked I answer that I’m from Cleveland.  When Tamir Rice was killed by the police, that was my neighbor that was gunned down.  When the CAVS won the championship, that was my team parading through my downtown.  And this weekend, those were my neighbors on the streets of Cleveland protesting the murder George Floyd.  And when things got ugly, those were my neighbors’ businesses being vandalized and looted.

The pain is palpable.

I told her earlier today how odd it is to feel so powerless in both this and COVID 19.  I am trying to not be a victim of either, but cannot be useful in a meaningful way.

I want to know who is destroying our cities.  Who is the Umbrella Man, the guy who unabashedly broke the windows of the AutoZone in Minneapolis early in the initial demonstration.  I want to know who brings a sledgehammer to a peaceful protest.  Who is the guy jumping on a police car in downtown Cleveland?   I confess that it has been a couple of decades since I have marched in protest.  There are protesters marching in our cities, but they are not alone.

Our infrastructure has been systematically dismantled over the last few years.  Anarchy, whether by design or through a lack of leadership, is still anarchy.  No one is safe, not my friends in the newly developed downtown and not those of us in the suburbs, once the norms of society have been forsaken.

The reporters are bravely broadcasting from the front lines.  The front lines are here, in Cleveland, Washington DC, Los Angeles, Chicago, and, of course, Minneapolis.  There appear to be three groups.  There are protesters.  There are opportunists, looters who see an opportunity to rob stores and restaurants.  And there are provocateurs who are inciting the crowds and confronting the authorities.  It is a toxic mix.  Add to this over-militarized police forces and the results, days and days of destruction, are inevitable.

And with luck, peace, as we understand it, will return.  Our neighbors will need our help to rebuild.  Our city will need our help.  Whether that it tomorrow or a week from tomorrow, George Floyd will still be dead.  We can hope that he will be the last unarmed Black man who dies at the hands of the police.  That message has been delivered.  Is anyone listening?

One thing is for sure.  The illusion of normalcy has been pierced.  There are no ordinary moments.

2 thoughts on “There Are No Ordinary Moments”