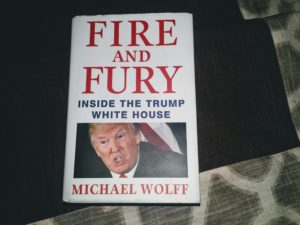 20 Seconds! This link is to 20 seconds of film history, a great insight into human character as well as the nature of government and power.  Enjoy a few moments of Casablanca.

We spend a week in Punta Cana, Dominican Republic, every January. This year’s beach book was Fire and Fury, Michael Wolff’s gossipy fly on the wall reporting of the first nine months of the Trump White House.  And I was shocked, SHOCKED, by how none of it was shocking.

Mr. Wolff’s book is filled with stories of entitlement, incompetence, and individuals more concerned with the creation of their own fiefdoms than with governing our country. But at no point is the reader shocked.  It is all so banal.  It is simply understood that this is the standard behavior of Donald Trump and everyone who comes under his gravitational pull.  Donald Trump is the Typhoid Mary of immorality.

The president at the core of Fire and Fury is a shallow, vain man, the living embodiment of the Peter Principle.  Surrounded by a cadre of Yes Men who spend all of their time trying to both game him and the system, the government veered from one self-inflicted disaster to the next.  And yet, you aren’t really surprised.  We, the American public, are forced into two camps.  One group, Democrats and moderates of all stripes, express righteous indignation with each revelation to the point of exhaustion.  His defenders, a core base of less than 40% of the public and the elected Republicans, have fallen into a predictable pattern:

This particular exercise, the combination of intellectual dishonesty and blatant hypocrisy, infects everyone Trump touches. The book details Trump’s fascination with bedding the wives of his friends.  What is sad is that you aren’t shocked.  It is just Donald. The Sean Spicer of the White House was barely recognizable to the people who knew him prior to the election.  Same for Reince Priebus.  The book details the destruction of the moral foundation of these men.

Tony Perkins of the Family Research Council said the Trump gets a “Mulligan”.  Jerry Falwell, Jr. defended Trump on national TV.  And the Republicans in Congress were strangely silent.  Credibility, integrity, moral standing – these are the first costs paid by every Trump associate and defender.

It doesn’t matter if Fire and Fury is 100% accurate. Even 75 % would be damnable.  Even 50% would be disheartening.  Fire and Fury was the perfect beach book.  Fast paced with tons of interesting detail, the only thing it isn’t is shocking.