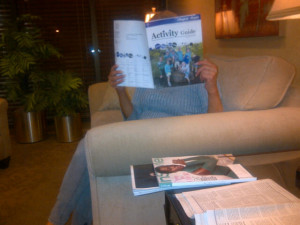 We lowered the average age of this building to near death when we bought our condo in 2012. Sadly, several of our neighbors have died in the last few years.  Most of our newer neighbors have been younger, but not all.  We have had the middle aged and elderly replaced by the old and the congratulations on still living on your own. One of our most senior neighbors has converted our building’s lobby into G-d’s waiting room.  There are stacks of old magazines and day old newspapers on the end table.  A plate of cookies or leftover pastry may be found on the coffee table.  I’ve been tempted to leave some funeral home brochures, but I don’t want to make anyone nervous. 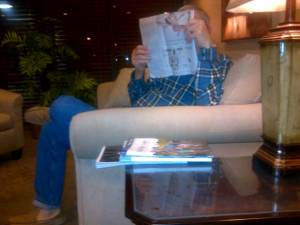 The road from Youngstown to Phoenix was nice and flat much of the way. But there were mountains and my under-powered Chevy Chevette had a lot of trouble getting up what seemed to be the nearly vertical highway.  The year was 1976.  There were times when the Chevette struggled to maintain even 30 mph.  I wasn’t alone.  Other cars and 18 wheelers stayed in the far right lane as Lincolns, Cadillacs, and big Chryslers passed us by.

While pushing and cajoling my car to the top, I never said, “L-rd, bestow ten more horsepower to your servant and his undeserving vehicle.” I may have briefly thought about the Little Engine That Could.  I cheered the car on as we reached the summit.  Win or lose, it never occurred to me to discuss the matter with G-d.

Some of my readers are non-believers. Talking, petitioning, or even thanking a Supreme Being is irrelevant to them.  The rest of us wrestle with this issue.  I have never had that kind of relationship with G-d.  I never thought to ask the Almighty for help on a math test, assistance with a foul shot, or even a solution to our current Presidential election debacle.  You might to talking to the L-rd on a daily basis.  That’s fine as long as you don’t hear Him calling you.

I would like to wish a happy and meaningful Easter to those friends celebrating Easter today. Not all of my friends are celebrating today.  Some are Jewish, Muslim, atheists, agnostics, Buddhists, and Hindus.  They obviously aren’t participating.  I also have friends and clients who are Greek Orthodox who will be celebrating Easter a month from now.   Seventh-day Adventists and Jehovah’s Witnesses are also commemorating the death of Jesus on a different day.

There are so many religions, and each religion has its fair share of sub-groups and sects. Our news is filled with stories about Muslims, as if all Muslims are the same.  Of course they aren’t, just as all Christians aren’t the same.  Even the day Easter is celebrated is subject to debate.  There are so many ways to seek for the ultimate Truth. We struggle with this much the way my Chevette struggled to climb the mountain freeway in Arizona.  And one day this may all be revealed to us.  But until then we all hang around here in G-d’s waiting room.