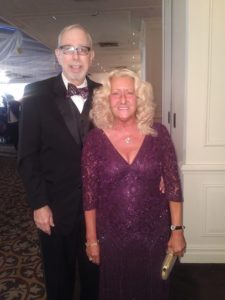 We were in Great Neck, Lon Gisland! Neither Sally nor I had ever been to this area of New York.  We were there for a wedding – Adam Shafiyan and Sarah Noble.  It was a wonderful, traditional wedding and we were honored to have been invited.

This post is not about Great Neck or the wedding. It is about what I experienced during the wedding reception.

As I said, it was a lovely wedding quickly followed by a lavish reception. The seven member band played traditional music as the couple entered the room.  The dancing, men with men / women with women, was joyful and energetic.  I participated for quite a while.  There was mixed dancing to a wide variety of cover songs after dinner.

Sally and I were dancing. She was wearing an evening gown.  I was in a tux, and yes, I was starting to shvitz.  The music was familiar, a mix of songs that could have been played at any Bar Mitzvah, wedding, or graduation party.

One song led directly into another. The band was excellent and the crowd was ready to party.  The bride and groom are in their mid-twenties and they, and dozens of their friends, were all on the dance floor.  Some of the older guests drifted between the dance floor, their seats, and the open bar.  We danced.

As the music got a bit faster I became aware not just of our dancing, but of my adrenaline surging and of a sensation of strength that I had not felt in months. I realized what I was feeling was a return of me.  I’ve not felt like me in an awfully long time.

Whether you are fighting to overcome a physical setback like me (cancer) or the emotional devastation of divorce or the death of a loved one, it is not unusual to feel personally lost. You may try to power your way through.  At some point, it may even appear that loss, that numbness, might be the new normal, might be permanent.  Sunday night, on a dance floor, I briefly saw/felt the old me.

I missed him. I hope to see him again soon.

4 thoughts on “An Old Friend”