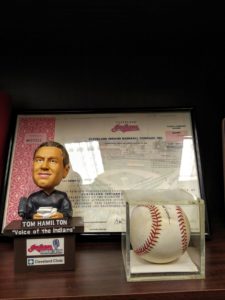 The Indians have won the American League pennant! We’re going to the World Series!   I am reminded of another time that the City of Cleveland celebrated a championship team.  The following was published in October 1997.

I’ve had some interesting clients. I’ll never forget the day I saw on TV the breaking news of an FBI raid on one of my guy’s warehouses.  Turns out he was the national treasurer of the Hell’s Angels.  Who knew?  But none of my clients are scalpers.  My friend Morris knows scalpers.

Morris and I were on East 9th Street looking for tickets for the third game of the World Series.  “Need two”, Mo or I said as we mingled with the pre-game crowd.  Sometimes a guy would stop and offer us a pair.  “I got a pair.  $500.”  There were lots of pairs at the $500 to $600 range.  We, however, weren’t interested.

We had started at Tower City and walked through the RTA tunnel to the WKNR booth and now to 9th.  We worked our way up to Euclid and then back down the other side.  We let it be known that we wanted tickets, but that we were willing to wait till after the game started to get our price.

At E. Bolivar we were approached by a short, Black man wearing a patch over his left eye. We said that we were looking and he said that he knew someone who might have some tickets.  Morris realized that we had finally found a runner and asked him “is Blood around?”

Now two Jewish guys asking for a scalper named Blood is like a couple of guys from Bay Village wandering through Cedar Center looking for Moshe. Patch said “Who?”  Morris, unflinching, said “Blood.  You tell him I’m here and that I need to see him.”

Blood appeared five minutes later. Thin, Black, and wearing glasses, Blood could have been just another guy wading through the crowd on his way to the rapid and eventually home.  No Indians’ apparel.  None.  He recognized Morris at once and told us that he would take care of us.  That was at 6:30.

The scene on the street was like a bad cop show. For the next hour and a half we watched a lot of money change hands.  Some of the scalpers were amateurs.  Some pros.  The police made a show of breaking up the “ticket mall” by bringing in two squad cars, two motorcycle cops, and three on horseback.  The amateurs quickly left, most of them selling their tickets to the pros.  The pros, knowing that the motorcycle and horse patrols wouldn’t stay, held their ground.  Within ten minutes the only police presence was a car with two cops animatedly talking to themselves and a pair at the crosswalk working hard on their imitations of Sargent Schultz.

Blood would stop by regularly, confer with his runners, and assess the business. He told them not to worry about the cops that were left.  “They’re cool” he said.  And he made a point of letting us know that he was working on our behalf.

We had decided that $100 a ticket was our limit. Some of the other scalpers and runners scoffed at our number.  The transactions increased as the game approached.  Getting desperate, guys who said that they would only spend $125 were forking over $150 to $175.  $250 tickets were coming down to $200.  This is how TV depicts a drug deal.  It was pretty amusing.  I told Mo that it reminded me of the old Lou Reed song.  “I’m just waiting for my man”, I sang in a low voice.  Morris laughed.  We held firm.

One of the scalpers, a big man wearing a bright blue Indians’ poncho, tried to make the sell. “Maybe you should just go home and watch the game on TV”, he said.  “I’m going to get my price”, I replied, “or someone’s going to have a nice souvenir to hang on their wall!”

The door was opened by a security guard and we filed into the restaurant. Blood stopped by the bar to negotiate with two sellers by the TV.  I saw Sheffield hit his homer.  We proceeded to the back.  The first guy gave him $300 and was rewarded with two seats in right field.  On our way to the back I had slipped Morris my cash.  He gave Blood the $200.  He picked out two seats for us.  We thanked him and quickly left.

So where did we sit? Third base, upper deck, Row E.  We were in $50 box seats.  Not bad.  The game, until the ninth inning, was pretty good.  The fact that we were at a World Series was memorable.  But the way we got in may have been the best part of the whole evening.

4 thoughts on “Looking For Blood On East 9th Street”