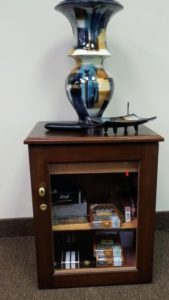 Reality sometimes interferes with our self-image.  And vanity only complicates the problem.   I understand this.  I should have written this post two weeks ago, but I couldn’t.

Clients, especially Medicare clients, bring their lists of medications with them to review when we discuss their health insurance.  Their prescriptions may also come up when we are talking about life insurance.   Some are on only a couple of prescriptions.   Some bring in laundry lists.  Inevitably they inquire about my meds.  Many know about my little health adventure in 2016.  And my answer has always been the same.  I point to my humidor and say that I am on “a stick a day”.  That’s it.  The only prescription I take is a cigar each evening.  Well that ended two weeks ago.  I am now on a blood pressure medication.

My doctor noted that my blood pressure was elevated in 2003.  By changing to a low-carb diet and with a lot of focus, I lost over seventy pounds and got my blood pressure under control.  Now, eighteen years later, I could stand to lose a few pounds but not enough to make a difference.  And though I personally blamed Trump, at 66 it is time for me to get some medical assistance.  Let’s hope the Rx works.  I am looking forward to my next appointment at the end of April.

Here is something you didn’t ask for – Josh Mandel is back.  Did you miss him?  Probably not.  Ohio will have an open Senate seat in 2022.  Rob Portman may retire early so that Governor DeWine can appoint a replacement.  Regardless, 2022 will be so wide open that even Mandel could be a contender.  It is important to remember the last time he ran in 2012.  This is what I wrote after that election:

Thanks to Nikki Ferrell of the Beachwood Patch, we now know that Mitt Romney lost nine of the ten Beachwood precincts.  Some people find that unsurprising.  After all, Beachwood is a highly educated, traditionally Democratic leaning city.  The shock was that Josh Mandel, a Beachwood High School alumnus, underperformed Governor Romney.  Not only didn’t Mandel carry any precincts, but his opponent, Sherrod Brown, actually received more votes than the President. It only took two reprehensible campaigns for Josh Mandel to wear out his welcome.  It will be interesting to see what kind of campaign he mounts two years from now.

Josh Mandel looked in the mirror while he was still a suburban city councilman and saw a US president.  His mirror lied to him.

My time as a Rabbi has ended.   I volunteered weekly at an Alzheimer facility for the better part of twelve years.  I created a Friday evening service for the residents and their families.  I mixed the pronunciations and tunes of forty / fifty years ago with a little humor and an occasional sermon that was geared to triggering long lost memories.  It worked.  Families were often surprised that grandma knew Hebrew.  Many of the residents enthusiastically participated in the service.  Some only attended for the challah and grape juice.  One woman had a beautiful voice that really added to our Sabbath prayers.  I used to joke that she hit every note while I just assaulted them.  But COVID ended my access to the facility.  It has been a year since I’ve been there.  Alzheimer’s is a terminal illness.  The last of my congregation has passed away.  Even if / when I could return I would be starting all over.

I never intended to make my Friday afternoon service a permanent activity.  But I formed a bond with the residents and their families.  My congregants died but there were always new ones and new families, spouses, children, and grandchildren to serve.  And now that is over.  I remember the first time I conducted a Sabbath service at the facility.  As I was about to start one of the residents turned to the woman next to her, and in a stage whisper that could be heard in the next county, asked if I was the new Rabbi.  I looked her in the eyes and said, “No Ma’am. I’m not a Rabbi.  I’m the next best thing, an insurance agent.”

My congregation is another COVID casualty.  My Fridays will never be the same.