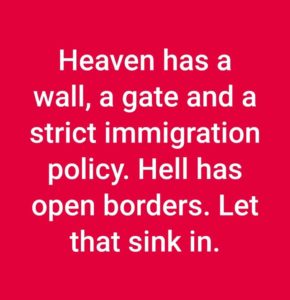 Pardon me while I take a few minutes of your time. I was on a phone call, waiting patiently for someone to answer, when I saw the above picture on Facebook.   And I stopped.  Thankfully, I got the client’s voicemail and just left a message.  The above meme left me speechless.

There are people who truly believe that post. They may even be proud of that post.  I AM NOT ONE OF THEM.

They celebrate the exclusivity of their heaven. I can’t relate.  Jewish teaching has touched on the concepts of life after death with schools of thought leaning towards reincarnation and others towards a more western concept of heaven and hell, but most of our emphasis has, like the Torah, focused on living life according to our laws and rituals.  There isn’t a reward, per se, for living righteously.  Living well is its own reward.  So the heaven thing is lost on me.  But even without a personal connection, the exclusivity of the post shocks me.

Most of us remember the dorm room conversations with the guy trying to explain to us why all the historical figures we named were barred from heaven because they weren’t his particular brand of Christianity.  The Evangelicals wouldn’t accept any Popes.  The Catholics were clear that Protestants were locked out.  And nobody was letting in Gandhi or an innocent child randomly killed in Vietnam (sorry, it was the early 70’s).  And since I wasn’t accepting the invitation du jour, I was bound for a warmer destination.  And in truth, I laughed at the whole thought.

But the United States isn’t some exclusive club. It is more than that.  The United States is a goal, a dream, the difference between life and death for people around the world.  Can we open the borders and let everyone in?  Probably not.  And I’m not exactly sure where and to who we open the gates.  The immigration argument has been raging for about 175 years.   And it is funny how similar the words some use today are to the ones their ideological forbearers used in the 1850’s.

From History.com – “The discrimination faced by the famine refugees was not subtle or insidious. It was right there in black and white, in newspaper classified advertisements that blared “No Irish Need Apply.” The image of the simian Irishman, imported from Victorian England, was given new life by the pens of illustrators such as Thomas Nast that dripped with prejudice as they sketched Celtic ape-men with sloping foreheads and monstrous appearances.”

The following appeared the Cedar Rapids Gazette in 1895:

Iowa coal operators should think twice before they begin the importation of Italians and other such people to work in their mines. After they have thought twice they should decide not to take such steps. Italian miners are not wanted…

They are not congenial to Iowa. Our people can make no place for them in the commonwealth. They are not in sympathy with our institutions. They are not desirable elements in the population. With others of similar character they have cursed Pennsylvania, Ohio, Nevada and other states.

They will not educate…They have poor conception of our standard of morality. They are not self-governing. Whenever they are to be found in considerable numbers, that locality bears every evidence of blight.

Life and property is insecure. Local government is unstable. Riots are of frequent occurrence. Murders are matters of every day life. Feuds and conspiracies are born with the babe and grow with the man. The pistol and the stilletto are their arguments.

They have no habits that our people can copy with benefit. Whatever they teach is a detriment to the community. They will not learn, because knowledge would overthrow their characters and cause them to cease to be the menace they have been whenever colonized in America.

If the mines cannot be worked without the aid of such men let them be closed. No business should be operated in Iowa that will not pay wages on which a man can bring up a family of Americans — citizens of whom the best of their countrymen are proud.

My family was once part of that unwanted, unloved horde. Jews fleeing from the Russian / Polish borders.  The victims of pogroms.  There wasn’t a welcome mat waiting for us in this country, this beacon of freedom, this heaven.  But we came, in part, because there was nowhere else to go.  And as I see pictures of young families, mothers holding babies, the desperate looking for an opportunity, I see my grandparents and the grandparents of so many I know.

The person who posted this picture at the top of today’s blog isn’t celebrating heaven. He is celebrating a wall.  What are you celebrating?

2 thoughts on “A Moment For Where We Are”