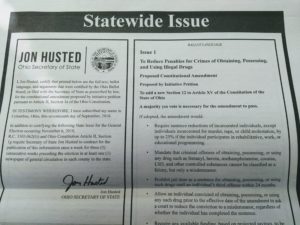 My friend Linda was in a public place the first time she saw an anti-Richard Cordray ad on TV.

The anti-Cordray ad mentioned at the very beginning the drug sentencing plan that Cordray *supports* (state issue 1) but through the rest of the ad, spoke as if it were HIS plan. At the end, I shook my magazine at the screen and whispered…”but you didn’t tell them not to vote for that plan.”

I was happy to see that I wasn’t the only person who had noticed the odd way the anti-Issue 1 crowd was framing their attack. The commercial that first got my attention begins with a couple of Barney Fifes looking into the camera and asks us if we are scared of Richard Cordray’s plan. If we aren’t, we should be. They then go on to talk about the criminals that would be roaming our streets and the danger we would face if Cordray’s plan was implemented.  At no point is Issue 1 ever mentioned.

As a contrarian, my first impulse was to send a check to the pro-issue 1 campaign.  Worse, the second or third time I saw the ad I was finally able to see where these sheriffs served, the middle of nowhere Ohio.  One was from Meig County, population 23,000.  The other was from Jackson County, crowded by comparison with a population of 32,506.  Together their counties have about as many people as Euclid, Ohio, a place that neither of them could get elected dogcatcher.

Issue 1 is too important to be discussed this way. Another ad, from the pro-Issue 1 campaign, has a father speculating that had his son had access to the right kind of treatment he might still be alive.  The spot is touching and effective, but again fails to provide any details.

This is the link to the actual ballot language with an overview.  The big changes include:

There appears to be three responses to Issue 1.

Proponents believe that incarceration is not the way to solve our drug problem. Instead of spending $1.8 billion on prisons we could better use the money to help end the addictions driving the criminal behavior.

The argument against Issue 1 focuses on the possibility of the early release of violent offenders.

Another opinion is espoused by people like Ohio House Representative Glenn Holmes (D-63) who recently noted the problem with making Issue 1 a part of the State of Ohio Constitution.  He thought that the state legislature was the appropriate place to address the issue.

I wish I knew the answer. I wish I knew how best to address our growing drug problem.  I would be interested in hearing from you.

How do you plan on voting on Issue 1?