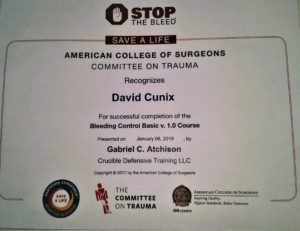 It had been 48 years since I had earned a certificate from my synagogue.  48 years since my last days of Sunday school.  But the world is changing and I, and close to 50 others, gave up our time to take another class.  A life or death class.  The certificate above is from the STOP THE BLEED training we took to be prepared for the unthinkable, a shooter invading our place of worship.

Yesterday a shooter invaded the Chabad of Poway, California, a synagogue just like mine.  It was Saturday morning and the last day of Passover.  I had been in services at 11:30.  The terrorist attacked at the same time.  The initial reports are that one congregant was murdered and several others injured.  As terrible as that is, it could have been a lot worse.  The congregation, like mine and so many others, had taken active shooter training.

President Trump went before the microphones on his way to a campaign rally.  “Looks like a hate crime.  Hard to believe.”  NO IT ISN’T.  There isn’t anything surprising about another disaffected white guy, trapped in his insignificance, looking for someone to blame.  The terrorists that burned down the Black Churches in Louisiana, raided the Tree of Life Synagogue in Pittsburgh, or the Chabad in Poway weren’t Radical Islamic Terrorist.  They weren’t members of MS 13, Mexicans, or even Hondurans.  They were white supremacists, the fine people who were yelling “Jew will not replace us” in Charlottesville not so long ago.

Yesterday’s white supremacist admitted that he was responsible for last month’s fire at the Islamic Center of Escondido, too.  There is a fear and hatred of the other.  If only the U.S. could get rid of the Jews, the Muslims, the Hispanics, or anyone else that doesn’t fit their particular vision of who is really American.  And if they were able to cleanse America, who would they then blame when they are still irrelevant?

The Rabbi reflexively raised his hands as the gunman shot him and had a finger blown off from each hand.  He was released from the hospital this afternoon and addressed the media.  He spoke eloquently of his friend, Lori Kaye, who was murdered by the terrorist.  He talked about the 33 years of community that he had helped to establish with his wife.  He asked how this could happen and why would a 19 year old believe that he had the right to invade a house of worship.   And then he asked, damn near demanded, that we do something – that we bring light into the world.  The Rabbi’s answer to darkness is light.  Not just Jews, but everyone of good will who could hear his message was charged to combat the darkness by bringing light into the world, to perform random acts of kindness.

I will heed the Rabbi’s call and I will donate money in memory of Mrs. Kaye.  But while we are waiting for his message to take hold, I’ll continue to participate in my synagogue’s security and hope to never need my training.