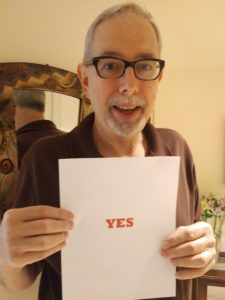 There is a real value in Yes, in being positive, in Hope. John Lennon talked about this as he described how he met Yoko Ono.  He attended one of her exhibitions and enjoyed the humor of her work.  He approached one piece with a certain amount of trepidation.  He had to climb a ladder and look through a magnifying glass to see the painting / message on the ceiling.  He was worried that it would be “No” or worse.  But it wasn’t.  The word was “Yes”. It was that positive message that made the difference.

Rabbi Greenberg delivered a sermon yesterday morning that claimed, in part, that Hollywood’s longtime focus on happy endings was traceable to the Jewish roots of the founders of the studios.  Now I realize that leaders in all cultures sometimes sound like the father in My Big Fat Greek Wedding, happy to claim every invention or cultural advancement, but he may be on to something.  So much of Judaism is about overcoming odds, of the weak prevailing over the seemingly strong, of knowing that there is a Promised Land and that the Children of Israel were going to get there eventually.  Passover is the retelling of the exodus from Egypt, the celebration of freedom from slavery.  And though a certain amount of Jewish humor is self-deprecating and sardonic, there is always a happy ending.  And there is always hope.

I received an email from a friend a few days ago. The subject line was “Your thoughts” and the content was a link.  My initial thought was that it was spam, but since he is a computer professional I quickly discounted that possibility.  My second guess was that it was about health insurance and, since he is reliably Republican, how the system is on death’s doorstep.  OK.  I clicked the link.  I wish I hadn’t.

The link took me to a smug, fifty-something, self-identifying Jewish guy who wanted to tell me to grow up and vote for Donald Trump and other Republicans. Yes, this would be the second worst link a non-Jew could send to a Jewish person.  This is the equivalent of a white guy telling his African-American friends to grow up and vote Republican or me explaining to my Catholic friends why they should eat steak every night of Lent.  You get the picture.  I was more than a little offended.  And that was before I saw the comments, like this one “Can you f*****g Jews just support Trump already? Stubborn kikes.” (edited)  We all agree that sending this link was inappropriate.

The video was thirteen minutes of propaganda, half-truths, and absolute BS. But most of it wasn’t any worse than the usual memes and crap on Facebook.   What was truly awful was the introduction.  Mr. Smug began by declaring that Jewish Democrats and Jews of a liberal bent are more interested in Jewish things than actually being Jewish.  Their Jewishness revolves around Seinfeld and corned beef.  Ritualistically observant Jews, in his way of talking Real Jews, were already Republican.  And that’s when I really got mad.

I know Jewish Republicans who don’t bother to go to synagogue on Yom Kippur and many who attend services daily. I can say the same about Jewish Democrats.  There are 613 Mitzvot (Commandments).  Not one of them speaks to political affiliation.  Several, however, admonish us from speaking ill of each other, from gossip, and from slander.  Loving one another, a positive commandment, isn’t predicated on one’s choice of presidential candidates.

There may be some reason to support Mr. Trump based on some interpretation of the Law. There may, but I have yet to see it.  Mr.  Trump doesn’t preach a Jewish message.  His speeches are uniformly negative.  When he tells communities that they are failing, that they live in danger, and finishes with “Choose me.  What have you got to lose?” he is preaching hopelessness, not hope.  Trump is the champion of fear, not courage.  There is no comfort, just despair.   An immigrant, probably illegal, is hiding behind every door ready to pounce and steal our country.  That’s not positive and it’s not Jewish.  Which is not to say that Jews shouldn’t vote for Trump.  That’s not for me to say.  Nor should anyone imply that a Jew, a Real Jew, should vote for him or anyone else.

Every Jew walked out of Egypt free, not just the Republicans, not just the ones who made light and fluffy matzah balls. It led to the ultimate happy ending.  YES.