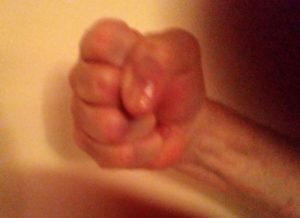 There is a car insurance commercial on television about a research center in Antarctica.  The scientists are stuck in this building, protected from the elements, and Carl, tone-deaf Carl, brought his karaoke machine.  His horrific singing is being piped into all of the rooms of his long-suffering compatriots.  Two of the scientists have to stop Kevin from just walking out of the building.  Here is the part I don’t understand.  Instead of leaving the center, why doesn’t Kevin just unplug the karaoke machine?  Hell, why doesn’t he destroy the karaoke machine?  And for good measure, why in the world doesn’t he not only destroy the source of the collective irritation, but while he’s at it, punch out Carl for good measure?

I don’t believe I had a particularly violent childhood, but I certainly remember throwing a punch or two (and being the recipient of a few, too).  There is no way in the world this behavior would have been tolerated in my neighborhood.  The fact that your friends wouldn’t put up with this level of selfishness was self-correcting.  Don’t want to be punched?  Don’t make everyone’s lives miserable.

We saw this in real life four years ago at the Republican debates.  It started with Donald Trump referring to Jeb Bush, a man of real accomplishments, as “Low Energy Jeb”.  That was nothing compared to what he did to Ted Cruz (R-TX).  At one point he linked Cruz’s father to Lee Harvey Oswald and the JFK assassination.  The final straw should have been when Trump insulted Cruz’s wife, twice!  Ted was insulted.  Ted called Donald a “New York Bully”.  Donald laughed, out loud, at both Ted, his wife, and Ted’s chances of becoming president.  Because we may not like a bully, but no one respects or votes for a wimp.

Didn’t you wish that one of those Senators or Governors would have gotten right into the face of this poseur and called him out?  And would you have popped him one for insulting your spouse?  I would like to hope that most of you would have, but it wasn’t you, it was Ted.  And because Ted was a wimp, Donald Trump is now president.  It is all Ted’s fault.  I can say that with impunity, because, you know, he really isn’t going to do anything about it.

Picture – In Search Of A Nose – David L Cunix