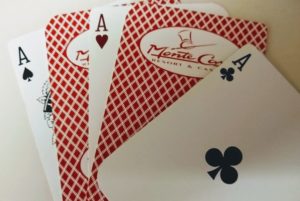 My first trip to Las Vegas was in the mid-90’s.  I had been to casinos and had even been to Nevada.  But this was Vegas!  I was there for a B’nai B’rith convention.  About 10 o’clock, after my friends had gone to bed, it was time to hit the tables.  I found a seat at a $5 Blackjack table and started to play.  15 – 20 minutes later, I was up a little and I surveyed the table.  I was shocked to realize that no one was having a good time.  The middle-aged guy next to me had been consistently losing.  Neither he nor the bored over-dressed second wife/girlfriend/hooker by his side were having any fun.  One by one I looked at each of my tablemates and saw that none of them, not even the dealer, were enjoying themselves.  I understood that I wasn’t going to win enough money to retire and I didn’t see any reason to spend any more time with them.  I picked up my chips and left.  Why stay if you aren’t having fun?

Two of my friends invited me to their weekly poker game.  These guys have been playing in a low stakes game for years.  I had been asked to play before.  This time I said, “Yes”.   The first half of the evening was devoted to a $5 buy-in, like when we were in high school.  Unfortunately, the games were similar to the ones we played back then.  Everything was high/low, or had a wild card, or had names like “Stupid” and “Super Stupid”.  And with all of that, we still had several Poker Mavens.  One guy felt compelled to tell anyone who didn’t act immediately, “You know, you can fold”.  Another thought that he was the keeper of the rules, an expert on this collection of games.  I was surprised that I held my own.

The second half of the evening was a $5 buy-in Texas Hold’em Tournament.  POKER.  I was on firm ground.  Mr. You Know You Can Fold was overconfident.  He had knocked out several guys and was the big stack.  My hand came, but I simply called.  He raised, but I simply called.  He pushed All In.  Call!  I crippled him.  I busted him on the next hand.  And I enjoyed it.  And at that moment I realized that this was my last game with these guys.  Destroying someone isn’t fun and crushing him for $10 or $15 is ridiculous.

What I learned twenty-five years ago still applies today.  You don’t stay if you aren’t having fun.