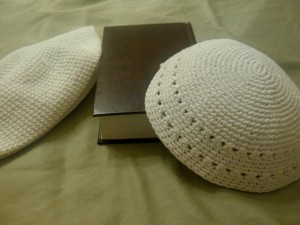 I have been looking for a white kippah for the holidays. Some Jewish men always have their heads covered.  Some never.  Many of us wear a kippah or yarmulke when engaged in prayer, when in synagogue, and whenever it seems appropriate.

I found my black knit kippah in the street markets of Tel Aviv. Not too big and not too small, with enough heft that it would stay on without a clip, I deemed my new kippah as windproof and wore it throughout both of my trips in 2008.  A few years ago Sally suggested that I should switch to a grey knit version to better match my hair.  And that is fine for every day, but what I really wanted was a white kippah for the holidays.

Rosh Hashanah begins this Wednesday at sundown. Jews around the world are preparing for the holidays.  Some of these preparations are spiritual in nature.  Others are more focused on family and tradition.  My friend Lisa drove almost 45 minutes just to get to a store that sold the special cheese she needed to make her family’s traditional recipe for blintzes.  Another friend should be dropping off her incredible honey cake to my office any day now.  Cards will be mailed.  Dinners planned.

My memories of the holidays always begin with the color white. The Rabbi and Cantor wore white kittels or white robes.  Some of the synagogues of my youth had choirs, also dressed in white.  I remember chairs on the Bimah covered in white and even white tablecloths at home.  Against this backdrop, a white knit kippah seemed perfectly reasonable to me.

Easier said than done. I have been looking for the white version of my black kippah for over five years.  The local purveyors of such goods were of no help.  I purchased a really big, Jerusalem kippah several years ago.  I searched the New York religious book stores with no success or satisfaction.  One store owner let me know how foolish I was to expect his store to have so popular an item outside of Israel.  But I never gave up hope.

It wasn’t my first online search, nor even my second. It was on my third attempt that I found the kippah.  The company is in London, England.  I ordered one white knit kippah.  The standard shipping was almost half the final price.  It was promised by the 29th, but arrived yesterday, a week early!

Here is wishing those of you about to celebrate the High Holidays a Healthy and Happy New Year filled with family, tradition, and joy.

4 thoughts on “The White Kippah”