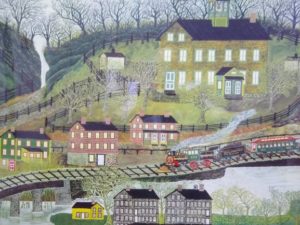 We’ve been told that there is an out-of-control train slowly bearing down on us.  It cannot be stopped.  We don’t even know if we could redirect it or slow its progress.

Using the word “know” is a challenge.  It is hard to say what we really know.  There are those who would have you believe that the people dying in China and Italy are just taking one for the team in a global effort to embarrass and defeat Donald Trump.  The other extreme have decided that a case of toilet paper is the first line of defense when the sky is falling.  Finding good information requires one to first learn how to disregard the bad.

The train, it won’t stop going.  Italy appears to be about 5 -7 days ahead of Spain and France who appear to be another 5 – 7 days ahead of us.  We can stand on the tracks and hope to stop it, or we can get as far away from the train as possible.  Social (physical) distancing seems to be a key element.  Since we have no idea who has the Coronavirus due to the testing failure, we must behave as if we are all contagious.  You might be asymptomatic.  You aren’t sick, but you could be dangerous to someone else.  There will be major inconveniences.  I have volunteered at an Alzheimer facility for the last twelve years.  That is on hold.  It has to be.  Many restaurants and other businesses have been forced to close temporarily.  Sadly, many will never reopen.

France closed its restaurants and clubs as of Sunday.  Ohio and other states have taken similar action.   Closer to home, churches, synagogues, and mosques are cancelling services in an effort to be socially responsible.  Acknowledging that the Lord helps those who help themselves is a wonderful lesson that transcends any particular faith or creed.

And then there is Fox and Friends.  Seldom has so much disinformation been packaged so slickly.  Last Thursday featured Jerry Falwell, Jr. and Geraldo Rivera.  Three years of serving as a Trump apologist only serve to reinforce the impression that Geraldo is still the same guy who broke into Al Capone’s vault.  Last Thursday he told a gullible national audience that they had nothing to worry about and didn’t have Coronavirus if they could hold their breath and count to ten.  Really!  If stupid was contagious, Geraldo would be Patient Zero.

There were six, seven, eight hour waits at our international airports over the weekend as Americans scrambled to get back home.  It had appeared that Trump was going to try to close the borders.  His message was, as usual, a word salad that failed to present any evidence of a well-prepared plan.  This was confirmed when we later learned that the mayors and governors had not been given any advance warning, nor had TSA been alerted.

“We knew when the president gave the orders that European travel was going to be cut off, that there would be an influx of people traveling back to beat the cutoff,” Pritzker said. “What should have happened is they should have increased the Customs and Border Patrol numbers and the CDC workers on the ground. They did neither of those.”

There are daily press briefings with Dr. Anthony Fauci and a rotating cast of characters, many forced to uncomfortably remain silent as the president contradicts their messages and common sense.  One day this is all an overblown hoax.  The next day Trump is a nationally known expert who understood the dangers of the Coronavirus long before anyone else.  Trump’s political appointees and sycophants, Pence, Seema Verma, the Surgeon General, etc. nod their heads with every word he speaks.  The professionals and the military stare blankly and must silently pray for all of this to end.

The train it won’t stop going.  No way to slow down.