Home 2010 and Beyond Focusing On The Trees

Focusing On The Trees 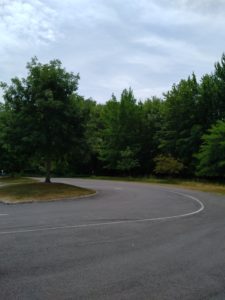 I was a little kid. The technicians led me into a dimly lit room and had me lie down on a table.  They put a pillow under my head, covered my waist and legs with a sheet, and asked me to be very still.  I was handed a name tag, not to put on my wrist, but to hold while I tried not to move.  The three technicians continued to talk to me as they moved around the room and checked their machines.  Someone pushed a button and my table and I were now high in the air, even with the shoulders of the shortest tech.  It was hard to say whether they were interested in a conversation or just wanted to make sure that I wasn’t nervous.  They asked me what kind of music they should have on in the background.  I named a couple of groups.  They didn’t appear to recognize the names and offered to play one of their favorites.  OK.  And with that they all walked out of the room.

A heavy door slid shut and I was now alone. Trying not to move, I surveyed the room.  There were two red lights, one above and one on the far wall.  The ceiling had a fake skylight.  There were panels of low light and a picture of trees.  I closed my eyes as the music started to come through the speakers.  Moments later I reopened my eyes to the sound of CLICK, CLICK, CLICK.  I almost sat up.  My table was actually a platform and I was a part of a huge machine.  It began to buzz and whirl.  And then it started to move.  I was stationary.  Four massive arms rotated around me.  Two were flat panels.  Two looked to be left over parts from a spaceship.   The music was barely audible over the sound of the machine.  It wouldn’t have mattered what they had played.

One full rotation. Now the four arms have reversed direction and are rotating the other way.  I tried to close my eyes.  When that failed I looked up and focused on the fake trees.  I thought about the park and being outside.  Two full rotations.  The arms reversed again.  There was more buzzing and clicks.  And then it lurched to a stop in the middle of a round.  The biggest, heaviest, scariest piece was hovering right over me.  I would have been squished if it fell on me.  And it just stayed there, hovering over me.  I became aware of the music.  I could tell that it may have seemed like I had been in peril for hours, it was really only a minute or so.  I was relieved when the clicking began.  The machine came back to life and finished the third and final rotation.  The door reopened moments after the machine stopped and the technicians came in to get me.

I was a little kid, yesterday.