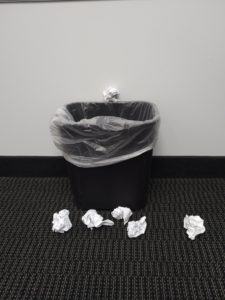 Friday was supposed to be a day of celebration. I rang the bell at University Hospital at noon.  That was the official end of my radiation treatments.  Nine weeks, five times per week.  Sally and I went to lunch on Coventry and then we visited a local business that will remain nameless.  Let me be clear, I have never experienced worse customer service.  I didn’t even know that it was possible to make some of the mistakes and service blunders I endured over a three hour period.  I am not a victim and I normally expect and receive good, often great, service.  This was more than an exception.  At one point I wondered if this was one of those awful practical joke shows and I started to look for the hidden cameras.  We were aggravated for the rest of the day.

I received an email from the business on Monday morning. I was expecting an apology.  What I got was their customer survey.  I didn’t answer it till later in the evening when I had yet to receive any other correspondence from them.  I wasn’t overly dramatic.  I didn’t reply in all caps.  I did detail 5 major errors.  I received an email the next day.  This is a portion of the note:

I have received your survey and spoken to _____ that you worked with and I am embarrassed. Not only do you deserve a huge apology from all of us, but so much more.  I don’t want to make any excuses for what happened on Friday. And an explanation of what was going on behind the scenes doesn’t fix anything.  It sounds like it started out bad and snowballed into a complete debacle.  Usually, we are much better than that and strive for perfection with every customer that visits our store. But for whatever reason, everything that could go wrong in the ______ industry, happened to you… on that day.  I am very sympathetic for the time you’ve lost and the fact that what should have been a celebration, turned into a day you wanted to forget.

Although I can’t take back what happened on your last visit, I can try and make it right the best I can. First, I want to sincerely apologize for everything that went wrong. That level of service is not our standard…

Notice that the first thing the manager did was to sincerely apologize. He said that they were wrong and that they were sorry.  No excuses.  No shared responsibility.  Having acknowledged the errors, he then made a generous offer to prove that he understood the full implications of their failure.  Will I do business with them again?  Sure.  Not because of his offer, but because of the sincerity of the apology and his understanding of their failure.

An apology, a sincere unequivocal apology, is so rare that it must be noted, even celebrated. If you confront someone for saying something inappropriate, you might get the weak, “I’m sorry you feel that way”.  No ownership.  No real contrition.  The worst offenders are our current batch of politicians.

Neither Hillary Clinton nor Donald Trump will ever issue an honest, heartfelt apology. The reasons may be different, but the results are the same.

Mrs. Clinton has been fighting with the Republicans and the press for 25 years. Many of her most egregious errors seem to have been made in an effort to avoid dealing with her antagonists.  Certainly the private server appears to have been designed with that in mind.  Can she apologize?  I guess not.  Any apology, any admission of error, will be replayed on TV, ad nauseam, for the balance of her political career.  There is an old joke that just because you’re paranoid doesn’t mean that there really isn’t someone hiding behind the door.  That may actually apply to Hillary Clinton.  Still, there is always the possibility that an apology for her missteps might allow us to move on.

Mr. Trump is different. He appears to believe that an apology or any admission of error is a sign of weakness.  We have witnessed countless gaffes, misstatements, errors, and “confusions” in the last year.  Fact Checkers view the daily onslaught of Trump pronouncements and Tweets much the way Sisyphus viewed the mountain.  His failure to acknowledge his errors and uncontrollable need to double down on his attacks makes him the very opposite of the kind of leader we would want our children to emulate.

We are about to choose between two people incapable of admitting error. In other words, an epic fail.