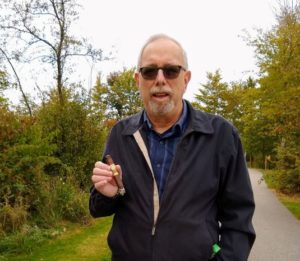 I was going to write about the debate, but before I could there was other stuff to address.  And then another thing.  And another.  And, in truth I’m sick of Donald Trump.  And you are too.  In fact, even if you like Donald Trump, you have had enough.  So it is time for a cigar.

It was a beautiful fall day and Sally and I decided to take a walk in the park.  I felt that the day warranted a special cigar and I opened a new box from my office humidor, the AJ Fernandez New World.

What an attractive cigar.  Even Sally noticed the seven inch, dark brown, box-pressed beauty.  We talked about the difference between my cigars and her cigarettes during our walk.

The most important thing, of course, is the taste.  But smoking a cigar is an experience.  It begins with the visual.  The appearance, the shape, size, and wrapper, the tobacco that you see on the outside, is one of personal preference.  The size and shape also impact how the cigar feels in your hand and in your mouth.  Most of my cigars, like this one, are between 6” and 7” long and have a ring size, circumference, of 50 – 54.  I have friends who prefer cigars that look to be about the size of cigarettes and others who prefer “Gordos” with a 60 ring.  Inside that wrapper are a blend of tobaccos that produce the flavor profile.  And the construction of the cigar is what creates a beautiful grey ash, a smooth draw, and an even burn.  The nicotine fix should be the least important part of enjoying a cigar.

You won’t see someone furtively smoking a cigar outside of an office building in sub-zero weather.

This particular cigar was crafted in Estelí, Nicaragua.  AJ Fernandez is a well-known major cigar producer.  The New World is a complex blend that produced a unique flavor.  Connoisseurs will tell you that they find notes of certain fruits, etc. when they take a sip of wine.  Cigar experts will say the same.  I can’t tell you that I tasted nuts or cocoa, but darn it was a good a cigar.

The walk, all three miles of it, were incredibly peaceful.  The only interruptions were the occasional bike riders and joggers.  I had an hour with Sally, nature, and an incredible cigar.  And no Trump.  I Know.  You’re jealous.