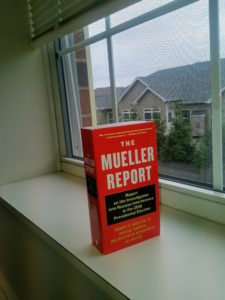 Are you still defending him?  Then you didn’t read the Mueller Report.  Don’t protest.  Don’t argue.  You didn’t read it.  Period.  Forget William Barr’s preemptive strike on the truth.  That doesn’t change the written report.  And don’t tell me that you believe the serial liar in the White House.  You really don’t.  You don’t want to know what is actually in the Mueller Report.  You are happy with the packing of the courts.  You may be thrilled that abortion may one day be illegal.  You’ve made that deal – Ignore the means because the ends are what you really want.  But don’t tell anyone that you’ve read the Mueller Report.  You haven’t.

I have been reading the Mueller Report.  It is a long slog.  It is not an easy read.  It is meticulously footnoted.  It is heavily redacted.  Even the footnotes have a lot of redactions.  But the most difficult part of the book is that it is about OUR country.  This would be a lot easier, and far more believable, if it was about some South American country that I had never visited.  Heck, I spent nine days in Australia in 2006 and I’d have a hard time believing this took place there.  It is painful, physically, mentally, emotionally painful, to realize that this happened on our soil.

The AMS Panel used control X-Agent during the DCCC and DNC intrusions was housed on a leased computer located near REDACTED Arizona.

This was a military operation.  The players, on the Russian side, were “Two military units of the GRU” (page 75).  The Facebook and Twitter posts, many of which some of you reposted, were created by a special Russian disinformation team, the Internet Research Agency (IRA), funded by Yevgeniy Viktorovich Prigozhin, a Russian oligarch with ties to Vladimir Putin.  This wasn’t some 400 pound guy sitting on a bed as the beneficiary of these efforts postulated.  The IRA created posts, organized rallies, and were in contact with the Trump inner circle (page after page after page).

Page 3 of the Introduction to Volume 1 states:

“In evaluating whether evidence about collective action of multiple individuals constituted a crime, we applied the framework of conspiracy law, not the concept of “collusion.”  In doing so, the Office recognize that the word “(collude)” was used in communications with the Acting Attorney General confirming certain aspects of the investigation’s scope and that the term has frequently been invoked in public reporting about the investigation.  But collusion is not a specific offense or theory of liability found in the United States Code, nor is it a term of art in federal criminal law.  For those reasons, the Office’s focus in analyzing questions of joint criminal liability was on conspiracy as defined in federal law. In connection with that analysis, we addressed the factual question whether members of the Trump campaign “coordinated” – a term that appears in the appointment order, with Russian election interference activities.  Like collusion, “coordination” does not have a settled definition in federal criminal law.  We understood coordination to require an agreement – tacit or express – between the Trump Campaign and the Russian government on election interference.  That requires more than the two parties taking actions that were informed by or responsive to the other’s actions or interests.  We applied the term coordination in that sense when stating in the report that the investigation did not establish that the Trump Campaign coordinated with the Russian government in its election interference activities.”

That is one dense paragraph but it clearly states that the Mueller Report never said “No Collusion” as Donald Trump brays daily.

Page after page the Mueller Report details the concerted efforts of the Russian government’s successful efforts to promote one candidate and defame his opponent.  This is just Volume 1.  Volume 2 focuses on Obstruction of Justice.  I will eventually get through this.  It would just be so much easier if it was about someplace else.