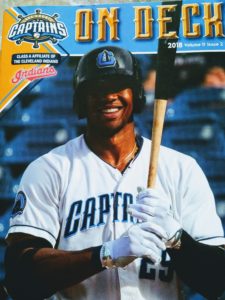 The public affairs announcer asked everyone to stand for the national anthem. I stepped away from the mustard dispenser and looked down to the field where a hand bell chorus began to perform.  They were pretty good.  Not perfect.  Pretty good.  I suspect that all of the musicians lived within 10 miles of this stadium.  This is small town America, the perfect escape from Trump’s America.

We were at a Lake County Captains game.  The Captains are a farm team for the Cleveland Indians.  I had won four tickets at a Chamber of Commerce lunch and I was looking forward to baseball, a brat, and a couple of hours of relative peace.

The stadium delivered. The food was reasonably priced and very good.  The service staff was uniformly helpful and friendly.  Well over half of those in attendance were under 15, possibly under 10.  There were little kids everywhere.  Some were even watching the game.

Everything about the game was minor league. The players, the promotions between innings, and even the cheesy product tie-ins during play.  When the Captains got a player in scoring position, Attorney Tim Misny exhorted the crowd from the scoreboard to “Make Them Pay”.  This was family fun.  No negativity.  No profanity.  No anger.  No Trump.

By now some of you may be yelling at the computer screen that Lake County has traditionally voted Republican and that Donald Trump carried the area in 2016.  All true.  But this isn’t Trump Country.  I spent four hours without hearing anyone complain about Mexicans or people from Latin America.  There wasn’t any yelling or name-calling, or lying, or even unwarranted bragging.  Not so long ago pundits on FOX News used to accuse Barack Obama of bring “Chicago-style Politics” to Washington. Donald Trump has infected the entire country with his special brand of coarseness.  Small town America may be one of the few places where we can escape.

Facebook offers no solace. No post, no subject is safe from the Trumpian trolls.  Much of Cleveland is obsessed with the future of LeBron James.  When Los Angeles became a serious option, the trolls focused on Californian politics and sanctuary cities.  And that epitomizes Trump’s America.  While the rest of us are looking for a good point guard, the Trumpsters are looking for a fight.

There is no relief on television or in the news. Republicans and even Democrats who refused to sink to Trump’s level were deemed weak and feckless. Polite society was told to not listen so carefully.  “Don’t take him literally.”  While another segment of our population came out of hiding to applaud Trump for saying what everyone was thinking.  But not everyone was thinking that good people donned khakis and polo shirts and marched through Charlotte chanting ‘Jew will not replace me”.  Freed from shame or repercussions and aided by Russian bots, the trolls emerged online and on our TV screens.  That forces us to choose from three types of TV news.  There is the network that promotes Trump and is willing to change its positions on issues to accommodate him.  There is the network that challenges him directly.  And there is the network, which in an effort to achieve balance, forces itself to allow the truth to be subverted by the likes of Kellyanne Conway and former Congressman Jack Kingston.

It is all designed to be very loud and disorienting. We are supposed to be off-balance.  We are trapped on Oceana and Trump is trying to decide whether we should be at war with Eastasia or Eurasia.  Eastlake seemed like a world away.

The speaker at our Mayfield Area Chamber of Commerce lunch was an on-air personality at our local ESPN radio station. Nice guy. The surprise wasn’t that I won some tickets in a trivia contest.   The surprise was that it was a Browns question.  I was the only one who knew the name of the starting quarterback the last time the Browns won a game.  Robert Griffin III.