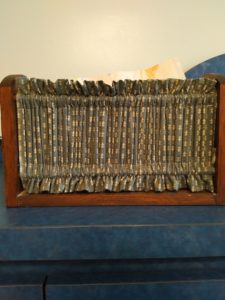 Country. Some homes had a few pieces.  We were totally committed.  It was the mid to late 1980’s and we had the ducks, the geese, and the Pfaltzgraff. I have to admit that I loved the country blue Pfaltzgraff dishes that were discontinued a week after we bought service for 12.  Still, my taste is a touch eclectic and having the whole house, every room, dedicated to one style, any style, was too much for me.  Especially one that embraced ducks and geese.

But life is filled with little negotiations. Who amongst us can say that they have always been gracious in both victory and defeat?

My Favorite Nurse (MFN) LOVED country. Her father’s hobby was woodworking.  He was very good and we received shelves and other pieces.  We also visited any number of craft shows to supplement our collection.

We were at the Yankee Peddler Festival, about 28 years ago, and MFN saw a napkin holder.  It had a simple design of wood and blue cloth.  It was $25.  I don’t remember the conversation, but I do recall that I was less than enthusiastic.  I didn’t want it and I didn’t want to spend 25 bucks for it.  I wasn’t a total asshole.  There were no lines drawn in the sand.  I paid the vendor and it came home with us.

Once the napkin holder was on a counter, filled with napkins, it appeared to have always been there. It was OK.  And one day, about three years later, the ducks, the geese, and MFN were gone.  But the napkin holder remained.

I still have the napkin holder twenty-five years and three homes later. Until today.  Today I retire the napkin holder.  It is tired and has given its all.  My friends at Zeber-Martell made a special dish for me to hold napkins.  This beautiful piece, and a few others with the same glaze, now sit on a cabinet.

I just hope this new piece realizes that it is replacing a really great napkin holder. 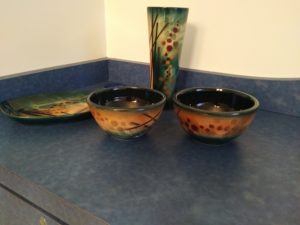