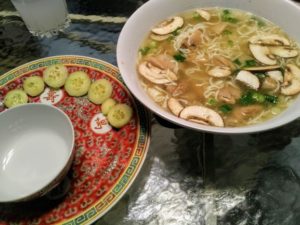 Working from home has allowed me to do more cooking.  Even though everything I make is both low-carb and Kosher, Sally and I still have a fair amount of variety even here at home.  In the last week I’ve made chicken burritos, Pho, chicken soup with kneidlach (matzo balls), and a pasta with pesto.  Yes, I’ve been cooking American.

It seems like the word American tends to confuse some people.  They hear the word and they immediately have an image in their minds of someone who looks a particular way, prays a specific way, and has a collection of beliefs that define who and what is American, or at least, a real American.  To be clear, I do not fit any of their imagined definitions of an American.  Most of my friends don’t either.  And a hundred years ago or so when the families of these so-called real Americans came to this country, there were some already here who would have been happy to have seen these people go back from whence they came.

Since we were seated a proper social distance apart and both wearing masks, it is not an exaggeration when I tell you that I could see in my friend’s eyes that he was distressed.   The rest of his faced was covered.  Mark (name changed) is a young guy, handsome, a doctor!  His family came to the United States when he was still a toddler and settled in Greater Cleveland.  This is the only home he has ever known.  But his last name isn’t Smith, or Jones, or even a Cleveland acceptable name like Russo or O’Malley.  His last name doesn’t end with –ski or -ovich.  We talked the other day about being “Other” in this current toxic culture.

The pandemic has given us way too much time in front of our computers exposed to social media.  The memes, many of them created in foreign countries with the goal of dividing us, can be the most disheartening.  One of my Facebook “friends” recently posted a truly disgusting meme.  There was a picture of President Obama and a symbol of Islam.  The caption was “My plan was to destroy America and to convert you to Islam.  And then, your Christian God sent Donald Trump to ruin it”.  Honest. I couldn’t make that up.  I had to read it a couple of times to fully grasp the hate it took to both create and repost such drivel.

There is a constant theme on Facebook that Democrats in general and Obama in particular have an agenda to destroy the United States.  Sixty years ago there were some who questioned whether a Catholic could be president.  Would Kennedy answer to the Constitution or the Pope?  There are enough Catholics in government that that question is now moot.  In 2012 we had some of the same people question Mitt Romney, a Mormon.  And Barack Obama has been a constant target.  The fact that a Muslim, a Jew, or even an atheist could serve as our president eludes these people.  The fact that Obama is a self-professed Christian shouldn’t be important, but since he is, the constant barrage of claims that he isn’t says more about those leveling the charge than about him.  It seems important to them to stress President Obama’s middle name, as if the name Hussein defines the man.  And maybe it does, for them.  Or maybe because he’s Black, visibly “Other”.

There also seems to be a need to label Donald Trump as some earthly savior of Christianity.  Not being Christian, I find it odd that such a major religion would need a protector, and if I was picking one, he wouldn’t be it.  Comparing a family man who has never had a hint of scandal, a guy who embodies what was once called the American Dream with a guy who used to seek publicity from the tabloids for his elicit sexual exploits, multiple marriages, and questionable ethics seems like an odd practice.  And yet, I see this daily.

I fully understand policy differences.  But the attacks on Obama and Democrats have long stopped being about the mundane.  One Facebook “friend” recently posted something from Franklin Graham, the son of the late, and far more apolitical, Reverend Billy Graham.  “Unless Christians Vote We’ll Lose’ the Country”.  What followed was twenty-six comments.  Most of them conflated a particular type of Christianity with the Republican Party with America as they know it.  To be clear, there is a place for Mark and I in their America, as long as we keep our mouths shut and let them have their way.