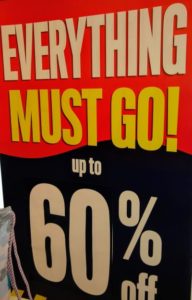 Mitch McConnell would make a lousy life guard.  He won’t stay on duty.  He doesn’t seem to care about all of those people drowning, calling out for help.  The last time anyone saw Mitch he was on his way home for another summer vacation even though he was supposed to be on duty.

Nearly 30 million Americans would tell you that a lifesaver was the $600 per week federal unemployment benefit that ended this past Saturday.  One day they were working and then, suddenly four months ago, they weren’t.  They were cooks, dental assistants, retail salespeople, and bartenders.  They ARE our neighbors.  They worked in our schools and our offices.  And now they don’t.

Many states were totally unprepared for the deluge of unemployment claims.  Some have yet to get caught up.  Unemployment doesn’t pay the bills, even in a state like Ohio.  And it is taxable.  One of my clients shared with me the details of her benefits.  She made $19,200 in 2019.  Her Ohio unemployment benefit is $172 per week before federal taxes, $155 net.  That doesn’t nearly cover food, shelter, health insurance, and the rest of her bills.  She is not alone.

The House of Representative passed the HEROES ACT, the bill to extend relief, on May 15th.   Mitch McConnell and the Senate didn’t begin to craft a response till the last week of July.  The Trump White House, hoping for miraculous cures to both COVID 19 and the economic woes, never bothered to prepare for the August 1st deadline.  There were no cures.

A large part of the problem is that the Trump’s point men on this issue are Treasury Secretary Steven Mnuchin and former-Congressman now White House Chief of Staff Mark Meadows.  As reported earlier today on CNBC:

“There’s no question, in certain cases where we’re paying people more to stay home than to work, that’s created issues in the entire economy,” Treasury Secretary Steven Mnuchin said in an interview Sunday on ABC’s “This Week”.

Where are these jobs?  Restaurants and bars are closing early, if they even opened, due to the pandemic.  And retail, one of the largest employers in this country, is in dire straits.  In the last two months we’ve seen the reports of major retailers going belly up.   Signet Jewelers, LTD., will be closing another 400 stores.  Some of those stores, Kay Jewelers, Zales, and Jared, never reopened after the national shut-down.  Others will be closing soon.  There will be little justice for the employees of the retail clothier, Justice, which announced two weeks ago that all 600 + stores would be closed.  The Justice employees will join the soon to be unemployed from New York & Company.  This economy cannot absorb all of these people.  These individuals have talents, but what business is looking to grow in the middle of this mess. 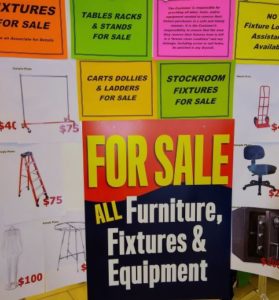 I wanted to see for myself the status of our retail environment.  Properly masked I visited Great Lakes Mall, Beachwood Place, and Aurora Farms Premium Outlets to survey the damage.  To be honest, I was shocked.

There were plenty of vacant spaces in all three retail locations.  Big names, like Brooks Brothers, were no longer at Aurora Farms.  All of the kitchen and cooking related stores were gone.  I saw parents schlepping their children to shop for back to school clothing and shoes.  There were a lot of families at the outlet mall, but not a lot of bags.

Great Lakes and Beachwood were far more depressing.   Beachwood had one bright spot.  Carter’s, a children’s store, recently opened.  It is next to the Microsoft store that has never reopened.  Beachwood has another issue.  Reduced Hours.  The mall hours used to be 10 AM to 9 PM.  The official hours are now 11 AM to 7 PM.  It takes less employees to keep those stores open.  Less people employed.  I saw a number of stores open only noon to 5 or noon to 6.  One of the jewelry stores is even closed two days a week.  That store once employed six people.  Now there are only two.  These are our unemployed.

The moratorium on foreclosures and evictions has ended.  The additional $600 federal unemployment relief is gone.  And so is Mitch.  The negotiations are between the administration in the form of Mnuchin and Meadows and the Democratic leadership, Pelosi and Schumer.  McConnell and Trump said that this wasn’t needed when the House passed the HEROES ACT in May, calling it dead on arrival.     Now Trump has a couple of underlings working on it while Mitch is on vacation.  Will the bill get done?  Sure, eventually, but some people have to drown first.  But that is bound to happen you don’t have a very good lifeguard.